Adding to the Clan Our original chickens are thriving.  We still miss Agnetha chicken, we still dont know what animal attacked her.  It will remain one of life's mysteries. 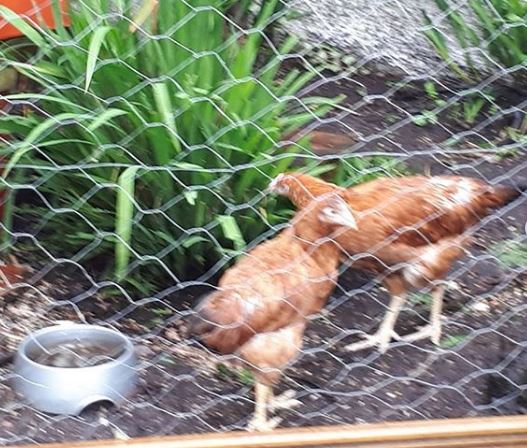 Meet the new girls.  We have added 2 extra Colombian Blacktails to house.  Blurry picture as we have only had them 24 hours and they are for the first time outside and near humans.  They have already worked out the metal bowl means food and that if they stand on their house's roof they can see the other hens.
The new emergency coop is made from the Christmas tree box we made in November.  I couldnt find a 16ft tree so we had to make a box and a skirt for it.  It has now been recycled to a chicken house!  The roof was the original roof from the chicken coop.  If you remember it leaked.  We used as many of the planks as we could that didnt have knots in for this.  Everything on this little house we already had.  The hinges were from a old cupboard in the cellar, the extra supports on the sides are fence planks that were warped and we cut them down.  The only thing that looks new, but is actually from the inside of the airing cupboard is a bolt to hold the door shut.  At present they are in the fixed run to give them time to quarantine from the older hens.  They can see and hear each other from a distance, but they cant interact.  Neither seem to be bothered with the others. 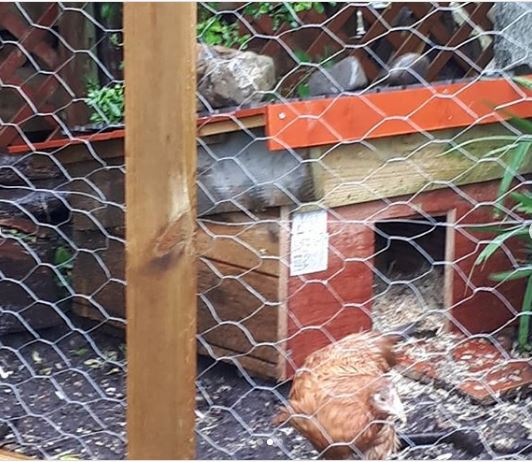 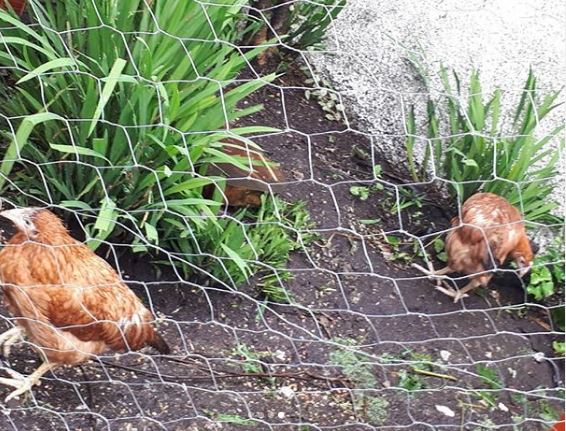 They look a little bit bedraggled right now.  This is the first time they have been outside and they were in a bit of a sorry state when we went to collect them.  They will eventually look like Shazza in the first picture.
We will train them to come for food as it will make it easier for us to get them in at night.  The original hens put themselves to bed.  These 2 sat in the rain and it was a bit of a Benny Hill sketch to chase them in.  They are drinking and eating well.  They are quite scrawny.  The will soon pick up.  No names as yet.
Posted by Sol at 15:58

I can just imagine the Benny Hill chase to get them in. Super photos Sol.

Hey Dave, they are a flighty at present. This morning I just stood next to the run and talked to them and the other chickens. They will get used to us, more so if they associate me with food. We are told they are 14 weeks, I think they are a little older than that as they seem quite large already.

I got some of the Colombian black tails just before lock down. We got four but had two die for different reasons - the two that are left seem great layers though and super friendly.

Hey Kev, yes they are very good layers I would have more but we have no need for more eggs than we will be getting. I think they are pretty cute. Mine have changed a lot in colour going from really dark burgundy brown to a light apricot in areas.

A good choice of chook...lovely eggs!