The End of the First book 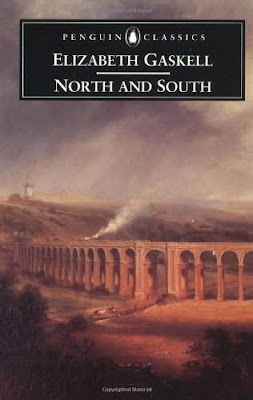 Well this months book is finished.  It was a hard slog in some parts and I was gee'd on with the thought of watching the TV adaptation of it.  I will now allow myself to buy it!!!

I must admit that over all I did like the book, although, the first 60 pages I do not feel that they are worth much.  And every one has a friend of family member that is as much of an airhead or should I use the word vapid, as are Edith and Fanny.

For that time, I am sure that Margaret was quite forward in voicing her opinions.  Maybe it was because of her living as she had with the Shaws and that people looked up to her father whilst he was in the Clergy that she had an opinion that she thought other should hear.  And both Henry Lennox and Mr Thornton asking her to marry them with out consulting the father.  Would this have happened?  I thought even in those days a courtship was commenced when the father allowed it.

They would all think me very rich with the amount of scarves and shawl type things I have.  Many will have been made in India!!!  lol


'a large Indian shawl, which hung about her in heavy drapes'

I am very pleased that I do not live in that time.  For sure, I would have been one working in the mills.  Up until recent years and even still my family were farmers or coal miners. My father would have been classed as an apothecarist, (he went to a grammar school).  So maybe not so far down the pecking order.

I also liked that Mr Thorntons character, had made it, that even before he met them, he was nice enough to make the landlord of the Hales, tidy up the house for them.


'There was no particular need to tell them, that he did not care to do for a Reverend Mr Hale, unknown in Milton, he was only too glad to do at the one short remonstrance of Mr Thornton, the wealthy manufacturer...'

There you go, part one of two.

What did you think?  Have you blogged about it?  Leave a link in the comments.
Posted by Sol at 21:52

Have to confess that I found reading this (for the second time) something of a trial, though no more than I do with Dickens at his most turgidly mawkish. However, Dickens tends to intersperse his novels with humour, usually in the minor characters. This book was totally devoid of that emotion. (I see it was published between 'Hard Times' and 'A Tale of Two Cities'). But 'North and South' is very much a product of its time, when there was the great divide opening between 'them' (the heavily industrial North) and the rest, where many in the south would have little experience of, or even witnessing, factory work and its hardship effects on society, so it would a world little heard of to the majority of its readers, which would have helped in holding ones attention.

As to the characters, it follows the literary patterns of the time in seeing women as adjuncts to male decision-making, as was then the case in society, and with little leeway for women to follow their own self-determined paths, which would have been treated with suspicion had they attempted to do so anyway. Can't blame Mrs Gaskell for that!

One thing in particular I do have difficulty with in literature is when a writer attempts to capture a regional dialect by writing a character's spoken words phonetically. It slows reading down appreciably, and is often indecipherable. A quite significant portion of conversation in this book is transcribed in this tortuous way.
Btw: Being North of England-raised myself, I have never heard of anyone changing the word 'she' to 'hoo' - nor recall any other author using that word.

I got more out of this novel than I did first time round, though I'd guess that on my initial reading I might have gotten rather fed up with it and started skim-reading (bad habit!) rather than making the effort to concentrate. Nevertheless, rewarding in parts as it may have been, I doubt if I'll be rushing to read it a third time.

Hi Ray, I found it quite hard to read and at some points it was a real slog. Like you said with the language used by Higgins. I couldnt work out if I was supposed to be reading it in a Yorkshire accent or if it should be a Manchester accent. That part went on for a very long time and I find that draining. And the word 'hoo' is a bit to close to ho for me. I am looking forward to watching the TV programme. I am glad that we arent reading another of her books. I think I would struggle to finish them. I know that is part of the reason for the read along, but lots of it was dragged out far too long and then areas of importance werent really explained.

On to the next book.

Thanks so much Ray, for joining in! I really appreciate it!!!!

Sol, I had the same thought with the 'hoo' word, but was uneasy about bringing that particular attention to it. ;-)

Hi Ray, no probs. I think maybe it is just a sign of the times and how it is viewed differently now. Like people saying awesome or something... yes a very hard book to carry on with