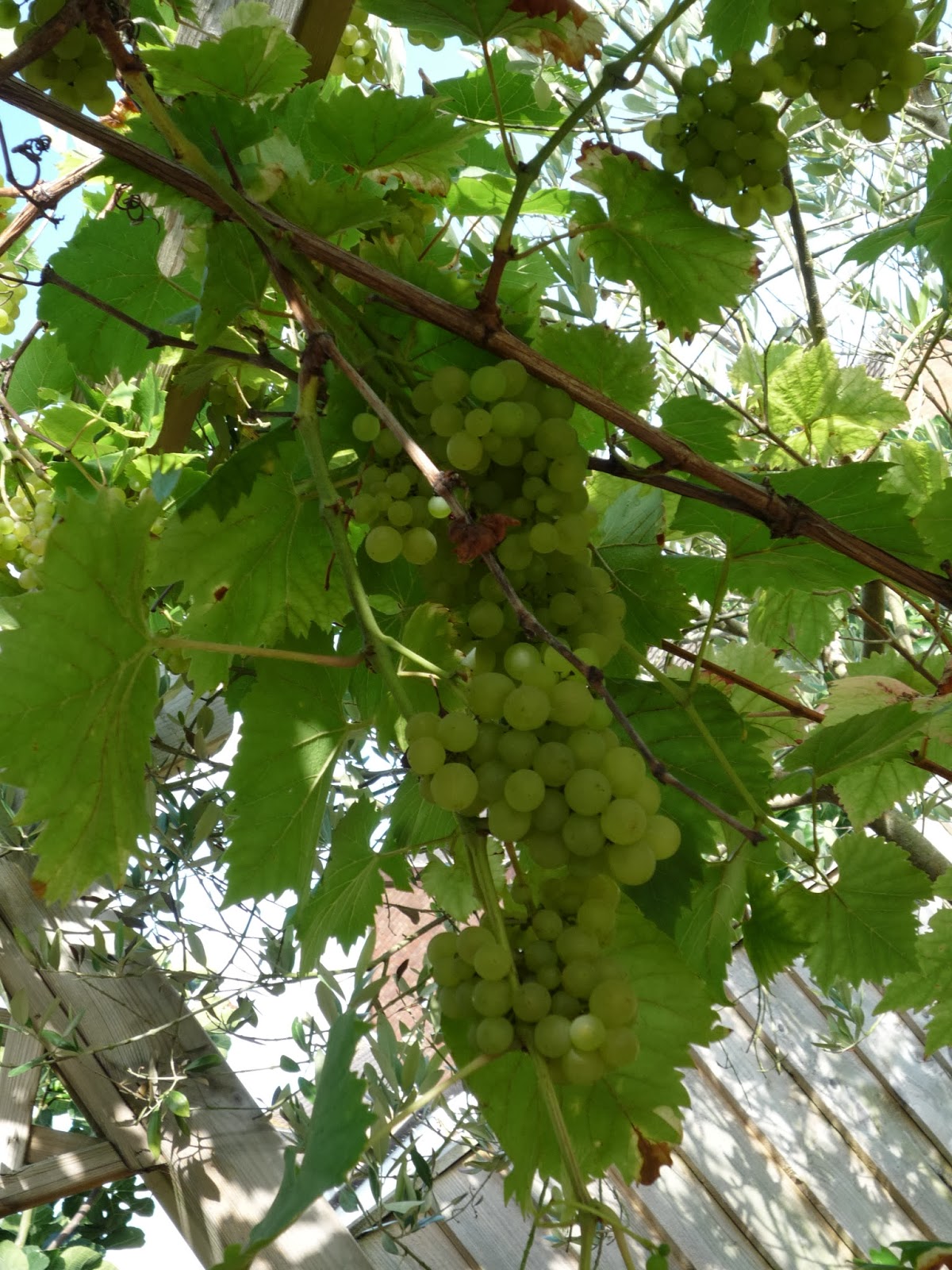 I am ignoring the wind and rain outside.

Yesterday, to take our minds off of the roof situation we went to the garden centre.  Everyone else was probably in the town centre spending like mad things.  I am also blocking out that it took 1.5 hours to drive 20 minutes away...

We have nearly settled on staying here, as we cant find a house that is better with a better garden or parking.  In the words of Sarah Beeney, 'don't move, improve'.  We previously had dealings with an architect and have decided to contact him to see what can changes can be made.

If we are staying I want to bulk the garden out with more edible plants.

The garden centres seem to always have a sale straight after Christmas, off we toddled to see what bargains were to be had.

Everything in the shop and the outside areas was 50% off.  Whoop whoop.

I spied a grape vine previously and there it was all lonely with huge tree ferns, we couldn't leave it so it came home with us.  Along with a bay tree, 10 more raspberry canes, early and lates.  A bag of soil for my blueberries and 4 rolls of ground cover fabric.  The ground cover will go around the old apple trees, the new apple trees and the cherry tree.  I will then use the gravel that was removed from newly grassed area.  This will mean little or no weeding.  I like gardening and eating from my garden, I do not like weeding.

If we extend the house we will have to move the green house down the other end of the garden and we will need a studio cabin added to the very bottom of the garden, as 1, it is so shaded we cant do anything with it due to the trees next door and 2, we need a home office/workshop.

We didn't buy this house to stay in, we bought it to fix up/flip and move on.  Nothing on the market for the last year and a half has been better than this house.

At least if we extend the house, it will need a new roof anyway and I finally might get the kitchen I have always wanted.  Every cloud and all that....

Are you planning a vegetable garden for the new year?  What do you grow that you think I should...?

edit: I didn't win the stuffing competition. My sister did.  Chestnut stuffing was the winner
Posted by Sol at 08:00

Will you have the energy to tread all those grapes?

Speaking of which veggies we'd like to have, caulis and sprouts, please, as long as I'm not the one growing them - plus always find cucumbers especially useful. (I'll leave that last one hanging in the air!)

I have success with herbs. That's about it.

Ray I will most definetly eat all the grapes. Strangely, my neighbours house is covered with a grape vine at the back. I couldn't work out why she never had grapes.... she is afraid of wasps so she cuts the flowers off... She told me this when I asked her for 20 vine leaves. For sarma. I didn't have any cabbage....

Susie, I can not for the life of me get parsley to grow properly.

We already grow cucumbers. I end up taking them to work as we cant eat them quickly enough. I don't have enough space in my house to store pickles... not yet anyways. and there is only so much cucumber soup you can eat. delicious but becomes boring

I have grown asparagus peas, they look like okra with frills down the side. I found an old recipe with the